Simon’s story demonstrates that consistent support from a small, specialist team can maximize quality of life and reduce barriers to discharge home. 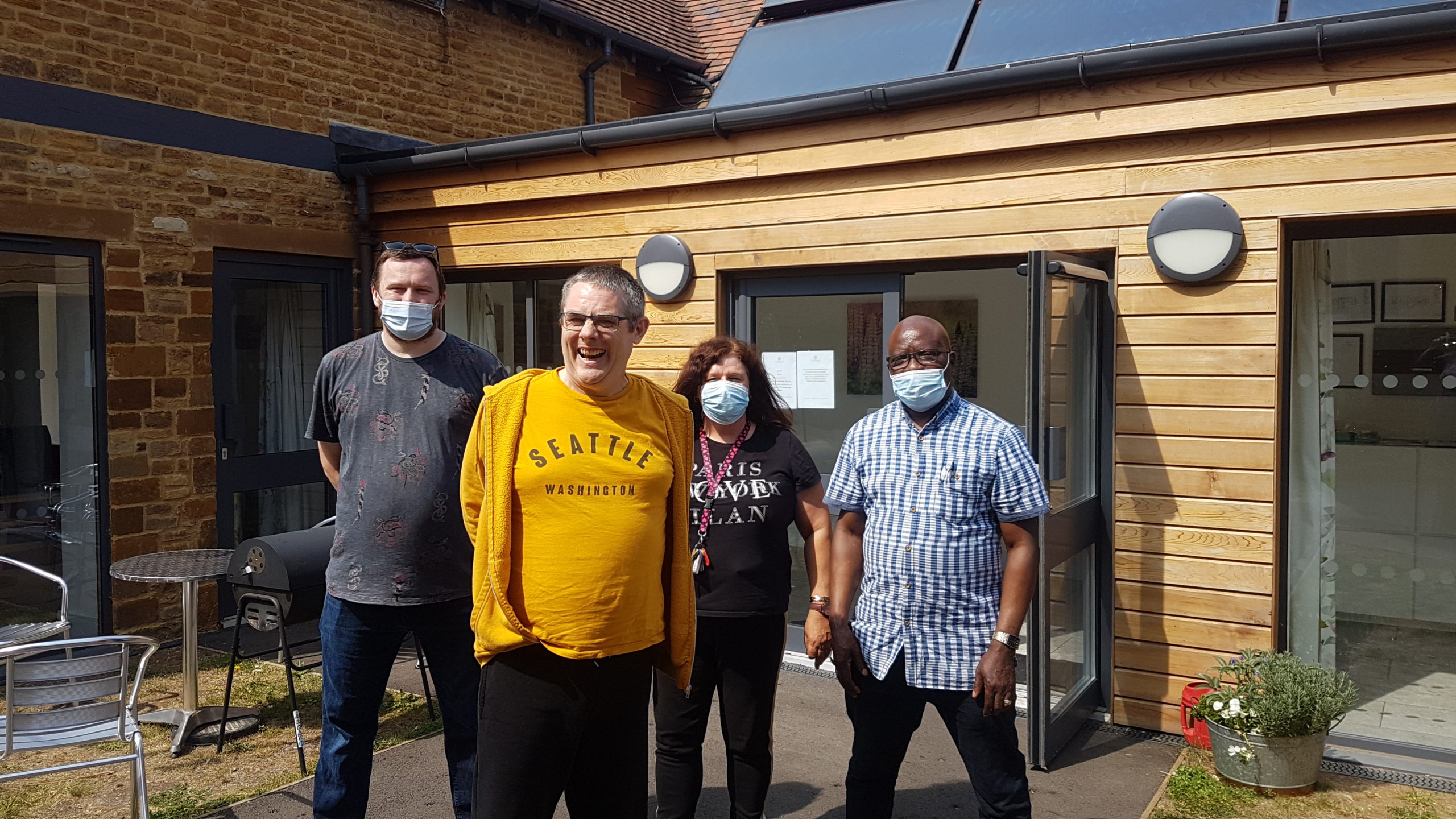 Simon was admitted to the Coach House in August 2019 as the first service user in our brand new service.

He had sustained a hypoxic brain injury in 2015 following cardiac arrest, and had resided in a number of care environments following his discharge from acute rehabilitation. He was referred to Richardson Care due to an increase in unsettled and challenging behaviours and as his current placement was no longer best-placed to meet his needs.  Simon had been increasingly isolating himself from the rest of the care home and would only engage in very limited activity with 1:1 support. He would frequently make complaints about his placement.

On admission to the Coach House, the overarching goal was to enable a safe discharge home for Simon. To enable this, further exposure to more independence would be required to appropriately risk assess and inform future care provision once at home. This would provide information as to whether his previous environmental restrictions within care homes were preventing his progression or whether his needs were more enduring.

Following an initial assessment of his needs it was evident that Simon struggled with flexibility of thinking and that unsettled behaviours would present when his expectations were not met.  This could then manifest itself in paranoid behaviours, which he would then perseverate and allow to dictate his day.

Simon was provided with a structured programme to assist him in managing his expectations: a programme which he devised with the support of his Keyworker, Gareth. By adopting a person-centred approach to the formulation of his programme, Simon felt in control of his day and less reliant on others to initiate activity for him. Simon was able to manage his own expectations of how his day would look. He became increasingly able to manage deviations from this if he was informed of the purpose of these changes. Whilst Simon still presented with some agitation on such occasions, the structure and the relationship he had built with his key staff enabled him to become more receptive to feedback.

Simon became more flexible in other ways and was more willing to take on new challenges. His initial engagement in food preparation was short lived, but his willingness to at least ‘have a go’ was a marked difference from his previous compliance. He started to eat different meals at lunch time and take interest in his nutritional intake. He joined the gym and set goals around his personal fitness. Whilst Simon was still largely dependent on others for some activities of daily living, he had developed new interests which significantly and positively impacted on his quality of life and mood.

Whilst Simon remained resistive to face-to-face therapy, he benefitted from oversight from the clinical team who would assess and inform future interventions and support. Simon gained some insight into the limitations imposed on him by his brain injury and focused on realistic goals, rather than shutting down at the suggestion of anything new. In brief, Simon started to enjoy his life.

Simon’s placement, in part, was to assess whether plans for future independent living were a viable option. During the year of his placement, we completed on-going risk assessments  and made observations to inform future care needs on discharge home. Close liaison with his case manager enabled remote planning during the Covid-19 pandemic, using technology to ensure that Simon could make decisions and choices regarding his future adaptations and environment. An occupational therapist from the team assessed Simon’s future home and made recommendations.

We also made recommendations on how a care package should look and Simon was involved in drawing up a person specification for the role of his personal assistant. In August 2020, almost a year since his admission, Simon discharged to his own home.

What did Simon say about the Coach House?

He felt that the staff treated him with dignity and respect and listened to him.

Simon said: “I like the room at the Coach House, I can’t complain.”

“I was only disappointed once during my stay.”

What did his case manager say about the Coach House?

“It was really lovely to visit yesterday and to see how well Simon is doing at the Coach House. It was particularly encouraging to hear that he is engaging with eating at the Coach House and not spending fortunes on going to a restaurant every day anymore! It was genuinely heart-warming to see the enthusiasm and satisfaction on his face, describing the steak lunch he had just bought, helped prepare and eaten.

Simon seems a great deal more relaxed in his new surroundings and it is abundantly clear that he has a great team around him, who understand his needs and are pro-active with him. He has not experienced that before, so it is all very pleasing! Many thanks.”

“Could not have managed yesterday (or the past year!) without yours and especially Gareth’s support. He was an absolute legend yesterday – he really is a credit to himself and the Coach House. He did not relent in his efforts to help Simon settle in. He even put a ton of DVDs away on shelves after driving down and unloading the van in that heat. The man is a tank!

“I will make sure our paths cross again the next time I have a suitable candidate – I’ve really enjoyed working with you and your team too. You helped transform Simon’s life!”